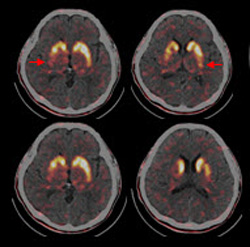 Parkinson’s disease is a progressive degenerative disorder that affects the motor or movement pathways in the brain. It is often difficult to diagnose, relying on symptoms that may appear in a number of different diseases. Early clinical symptoms may be mild such as trembling, rigidity and a general slowing down in movement. Many patients eventually have difficulty walking, talking, or completing other simple tasks, leading to a severe disruption of the body’s ability to move.

While there is currently no cure for this condition, progressive and appropriate therapy allows some patients to maintain a good function throughout their lives. Because Parkinson’s has a wide range of early symptoms that are similar to other neurological conditions, diagnosis is often difficult.

Parkinson’s disease starts in the cells of the brain that transmit the impulses that cause movement into the neurologic pathways. Dopaminergic therapy at a relatively early stage may be most effective in alleviating the symptoms of Parkinson’s disease, and may even have a long-term impact on patient mortality. Because much of the brain’s movement pathways will be compromised before symptoms even show, the disease will remain undetected and untreated for a significant period of time.

Accurate, early diagnosis of Parkinson’s disease is important to determine optimum treatments and to give the patient the best possible outcome – and PET scanning can help.

The symptoms of Parkinson’s disease result from a deterioration of the metabolic pathways in the area of the brain called the substantia nigra. Cells in this part of the brain produce dopamine, a chemical that transfers messages in the brain. Lack of dopamine disrupts the ability of the brain to direct or control movements normally.

Using an imaging drug that is like dopamine (18F-DOPA), the PET scan will show changes in these dopaminergic systems. In Parkinson’s disease, the PET scan shows a characteristic pattern of reduced uptake for 18F-DOPA, and it begins to appear very early in the course of the disease.

This enables doctors to know if the gradually increasing symptoms that may be a tremor, gait disturbance, or others are the result of Parkinson’s disease or some other cause. Therapy can be started at its earliest possible stage.

PET can indicate with a high degree of accuracy if a movement disorder is Parkinson’s disease or another type of disorder.