PET/CT imaging can show precise areas of increased or decreased radiotracer uptake in the brain and physicians use this information for diagnosis of brain disease. Different radiotracers can show glucose metabolism, blood flow, oxygen and amyloid plaque in the tissues of the working brain. 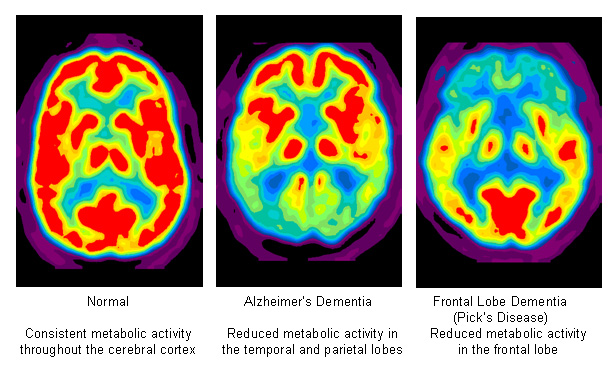 Brain tumors, strokes, and neuron-damaging diseases which cause dementia such as Alzheimer’s disease, all cause great changes in brain metabolism, which in turn causes easily detectable changes in PET scans.

In Alzheimer’s disease, for example, there is a characteristic pattern of decreased biomarker uptake in the posterior parietotemporal cortex, which could be caused by neuronal depletion in that area. Physicians use this type of information to differentiate Alzheimer’s disease from fronto-temporal and other dementia.

Currently, patients with symptoms of cognitive impairment can often be misdiagnosed with Alzheimer’s disease as only neuropathological examination, usually performed at autopsy, can definitively rule out the disease.

Now, for the first time in clinical practice, physicians can utilize PET imaging to visualize evidence of amyloid plaques when evaluating for Alzheimer’s disease. Approved in April 2012, Amyvid is a radiotracer intended for use in adult patients with cognitive impairment who are undergoing clinical evaluation for Alzheimer’s disease or other causes of cognitive decline. Amyvid is injected into the bloodstream, where it crosses the blood-brain barrier and binds to amyloid plaques. The PET/CT scanner detects a positron signal produced by the radiolabeled fluorine-18 isotope.